Like many great Cathedrals around the world, Christ Church Cathedral was built over a long period of time.  Planned by the Canterbury Association, which had been founded in 1848 with the aim of establishing a Church of England settlement in Canterbury, the Cathedral was to be the physical and symbolic heart of the city.

In 1851 Ridley Square, the area within which the Cathedral would be built, was re-named Cathedral Square.

Cathedral Square was originally named Ridley Square after Nicholas Ridley, Bishop of London who, along with Latimer and Cranmer, was one of the 16th Century martyrs burned at the stake during the Marian Persecutions

In 1856, when Bishop Harper was enthroned as the first Bishop of Christchurch, the Cathedral project hadn’t progressed. Acting on behalf of the Cathedral Commission, Bishop Harper instructed that plans be commissioned from Sir George Gilbert Scott, a leading British Gothic Revival architect.  In 1862 Harper received plans from Scott for a stone Cathedral with an internal timber structure.

British architect Robert Speechly was brought out to supervise construction, and the foundations were laid in 1864 but work ceased by 1865 due to lack of money.

The building was consecrated as Christ Church Cathedral in 1881.

The Chapter Minutes of November 1881 record that the Cathedral, at that date consisting of the Nave, South Porches, Narthex, Tower, Spire and temporary Chancel, eas consecrated and dedicated as Christ's Cathedral. It was later known as the Cathedral Church of Christ then Christ Church Cathedral.

In 1894 the west porch, designed by Mountfort, was added.  However, it was not until 1904 that the original Scott design was completed.

Mountfort died in 1898 and his son Cyril the became the supervising architect completing the chancel and transepts between 1899 and 1904.

In 1960-62 vestries were added to the north and south to a design by local architect Paul Pascoe.

The Visitors’ Centre, designed by Christchurch architects Wilkie and Bruce, and erected to the north, opened by Queen Elizbeth II in 1995.

Work on the interior was largely undertaken between 1881 and 1898 supervised, and essentially designed, by Mountfort.

The Cathedral's interior housed an outstanding collection of stained-glass windows, Victorian encaustic tiling on the north wall and floor of the central aisle; decorative carved screens, reredos, altars, panelling in stone. Over time woven tuku tuku panels, timber and brass plaques, a War Memorial Chapel and a Pacific Chapel, as well as many other items, have all been added, that all help to tell the long rich and diverse cultural and social history of the Cathedral.

Within the Cathedral grounds are the Columbarium (2000), which house the ashes of those who have passed, and the Citizens' War Memorial,  a monument to those who lost their lives in the WWI.  It was designed in 1933 and completed in 1937.

The memorial contains six bronze allegorical figures of Sacrifice, Peace, Valour, Youth, Justice and a large figure of winged Victory.  These works were modelled in clay and cast in bronze by sculptor William Trethewey. The monument itself was designed by local architect George Hart in Portland stone, Coromandel granite and travertine.

The Citizens' War Memorial is one of the last WWI memorials to be erected in New Zealand.

As it was sited on Cthedral ground, the Dean and Chapter of the day stipulated certain elements within in the design criteria which included the central motif of a cross inextricably linking its design to the Cathedral.

To enable the church to effectively use its land in the reinstatement project, the memorial has now been carefully deconstructed and will be re-erected in Cathedral Square to the west of its original position, where the Police Kiosk once stood.  This position enables it to retain its spiritual, social and cultural relationship with the Cathedral and wider Cathedral Square.

While we are reinstating Christ Church Cathedral for information on Cathedral services please visit the Transitional Cathedral website for details. 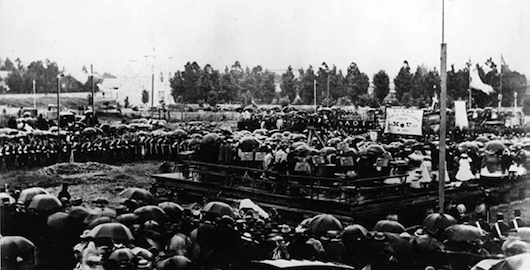 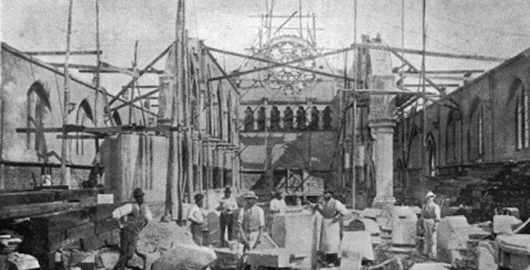 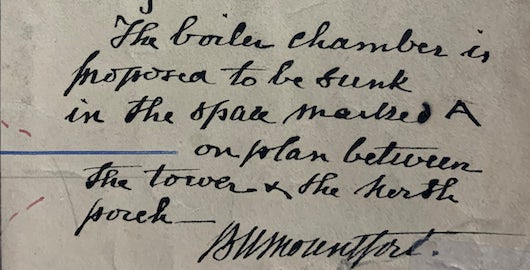 Supervised and largely designed by Mountfort. 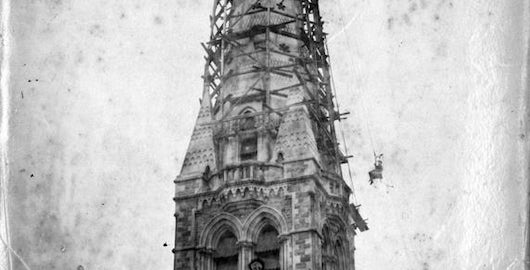 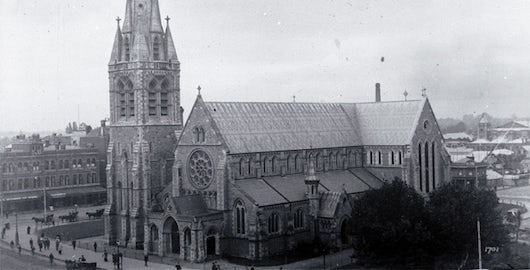 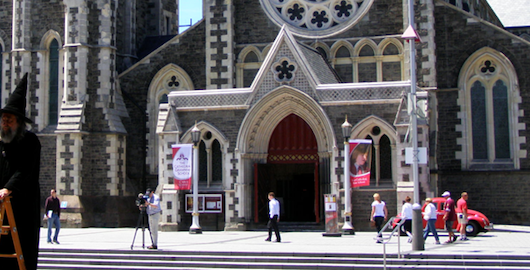 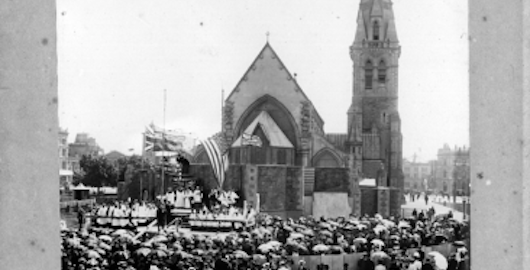 Construction of stone chancel, transepts and apse. Mountfort died in 1898 and his son Cyril Mountfort became the supervising architect. 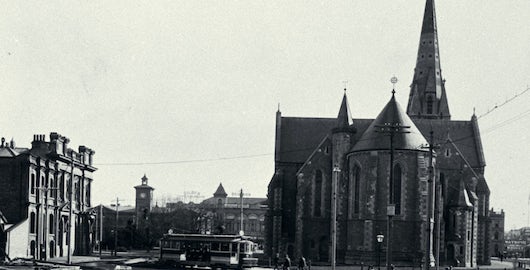 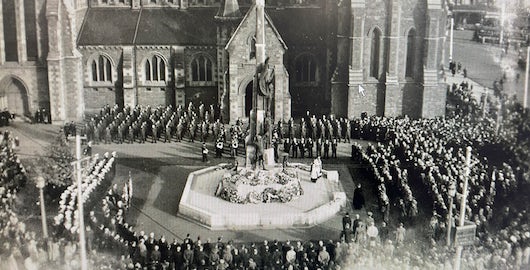 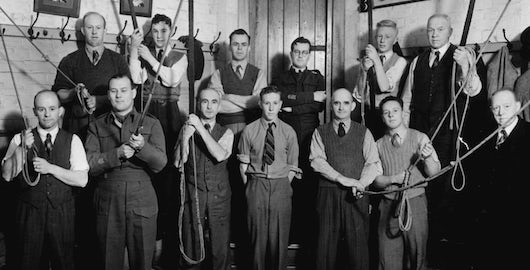 Additions to the Cathedral 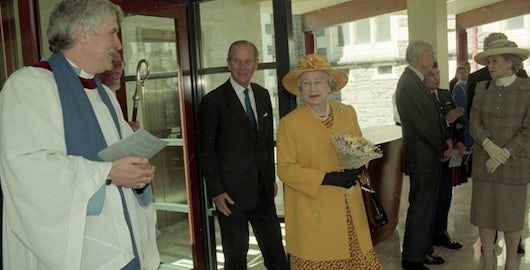 Visitors' Centre erected to the north, designed by Wilkie and Bruce and opened by HM Queen Elizabeth II in 1995 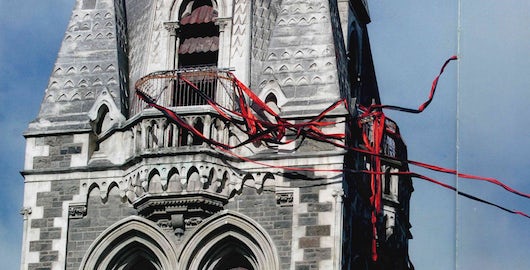 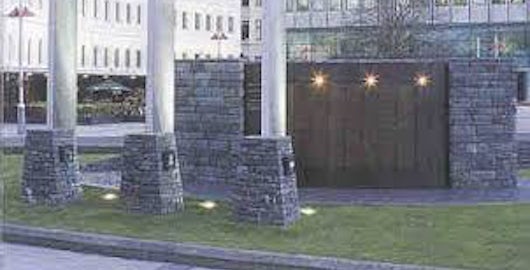 Installed to the south of the Cathedral 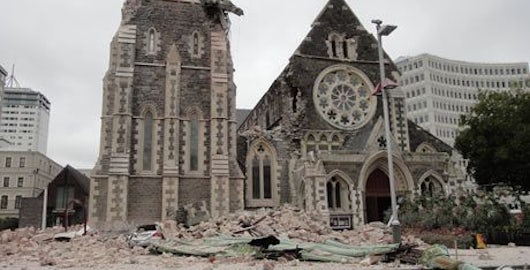 Cathedral severely damaged, particularly February 2011 when the tower and spire collapsed. On 13 June 2011 the west elevation was badly damaged causing the full collapse of the iconic rose window. 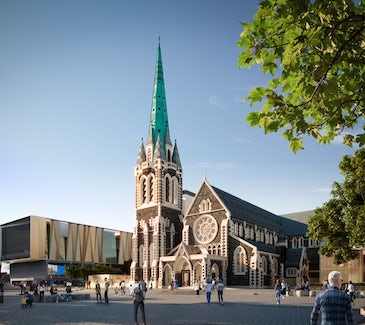 The Concept Design was released on 22 October 2020. It features new ways to explore and embrace the Cathedral and new places for hospitality and mission. 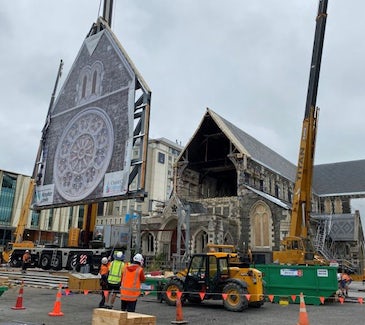 Stabilisation, strengthening, the tower and the new centres are all distinct phases of the Reinstatement Project. Read more about them here. 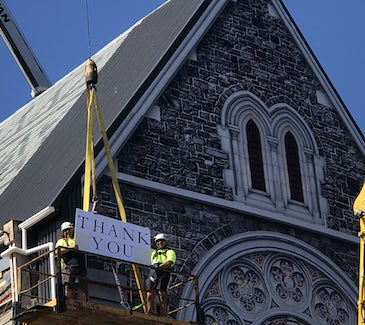 Through a general donation to the Christ Church Cathedral Reinstatement Project you become an integral part of the future of the Cathedral.