Chris, you were there, working in the Cathedral during the earthquakes, tell us a bit about that.

It started as a usual working day. We’d gotten used to aftershocks and ignored most of them. When this one started, I was at my desk with the Director of Music. As usual, we ignored it but soon realised it was bigger than normal. We took shelter in a doorway as the quake got louder and more violent. Our Theologian in Residence Revd Lynda Patterson, appeared out of her office looking a little surprised before venturing back under her desk. The noise was incredible, and it didn’t take long to realise why. Usually in an aftershock the bells would swing back and forth, and we would hear them ring. There was no such noise this time.

Between my office and the main Cathedral was a passage with a glass partition. We noticed a cloud of dust moving up the length of the Cathedral - another indication that this was a bit more than another aftershock. Once the shaking stopped I ventured into the main body of the Cathedral, although could see very little because of the dust. As the dust settled I could see light coming from the west end - where light shouldn’t be – and it didn’t take long to realise the tower was down. I spent some time getting bewildered tourists out, fortunately none were injured. Some of our volunteers suffered minor injuries and had luckily already made their way out.

Once the building was empty and quiet, myself and other staff wandered around checking for anyone who may still be inside. It was eerily quiet. By this stage we could see the extent of the damage with the huge pile of rubble at the back of the nave. Once I was sure that there was no one inside I went out into the Square. I was met by one of our regular homeless friends who asked if I could get his bag from inside. I retrieved it for him and last saw him heading across the Square. I haven’t seen him since and sometimes wonder what happened to him.

Staff congregated at the War Memorial to view the damage and to see Sue Spigel being rescued from the room above which was the north porch where she had been working as a fabric artist-in-residence. There was a sense of incredulity that Sue appeared to be the only significant injury. However, none of us could believe that the tower had been empty, and we were sure that there would have been deaths. This was confirmed a week later when I was escorted back in to retrieve the CCTV footage from tower cameras. The police and Urban Search and Rescue compared footage of everyone in the tower with footage from the cameras in the Square. Everyone who had been in the tower was confirmed as later being seen in the Square.

The damage was of course significant. After a couple of hours we were well aware there was nothing else for us to do so collected the rest of our belongings. I was somewhat surprised when the landline phone rang (we had a system with battery backup). A voice asked if this was bad time to talk about services, I suggested it was. The good thing was that staff could use this phone to ring family as the cellular network was playing up.

A week later staff met at St Barnabas Church offices. One last piece of karma - someone had parked in the Music Director’s car park (an unforgiveable sin), but one of the huge sheets of security glass protecting the eastern stained-glass windows had fallen on it, causing a lot of damage. Our Music Director got into his entirely undamaged car and headed off.  The central city was already being locked down and everyone was being told to leave. It took me over an hour to get home (usually a 5-10 minute trip), fortunately to discover that my house was still in one piece albeit with no water or power, and a very bemused dog who had been playing in the liquefaction.

Tell us a bit about your role at the Cathedral?

I’ve been working at the Cathedral since 1991. I went on an OE in 1990 and returned to find a job (my Masters was in Geography - still not entirely sure how I ended up working in a Cathedral). While looking for gainful employment I volunteered as an assistant verger and cleaner at the Cathedral, having known my predecessor there since I was a child. I then moved to helping the Dean create some educational resources for visiting school groups and then the Assistant Administrator’s role fell open. After Noel Woods retired as Administrator, I was offered that position. So, in a variety of roles I have been there far too long!

I often describe the Administrator’s role as looking after the things that aren’t liturgy. This ranges from events, the shop, cleaning, to being a general dogsbody!

In addition, I do the jobs of Cathedral Verger. When you mention Verger people often think of the grumpy character from Dad’s Army. Whereas some may say there are similarities, I say there are none.  The verger is the stage manager for the church services making sure that people (and furniture) are in the right place at the right time and that things run smoothly; or at least when things aren’t running smoothly I make sure no one no one can tell.

It’s been a long journey to get services and visitors back in the Cathedral, what’s the first place you’ll go?

Assuming I’ll get a chance to get in before we actually open to the public, I’m looking forward to just standing in an empty nave. The building was always at its best when there was no one in it and one of the perks of the job was to experience that on a daily basis. However, I am looking forward to getting back up the tower to join the bellringers again. I have been a ringer long before working here and it will be a delight to have the Cathedral bells ringing again. The ringers are already working on ensuring we have enough bellringers for the occasions, as it takes a while to train them (anyone interested, see me!)

You must have so many memories of your time in the Cathedral, tell us a bit about...

The most obscure thing you remember happening:

The most challenging thing:

What you enjoyed the most?

Tell us about 2027, what are you most looking forward to about being back in Christ Church Cathedral in Cathedral Square?

Getting back into a space where I spent 20 very enjoyable years. 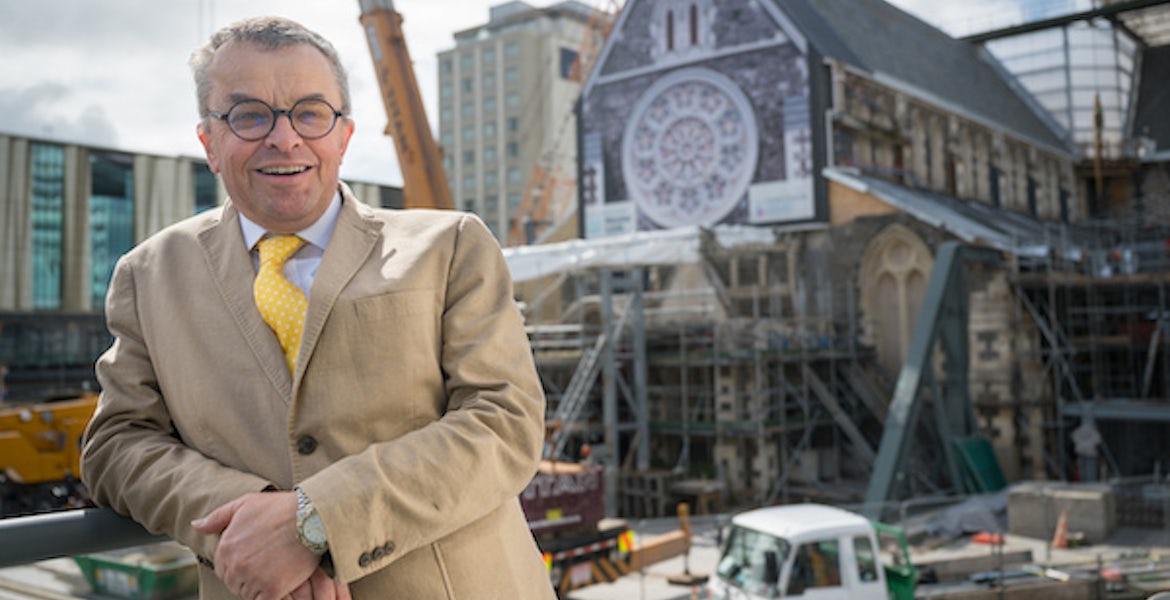