The Reredos and its Statuettes

At the eastern end of the chancel behind the high altar is the beautiful carved reredos erected in 1950, the centenary year of the beginning of organised European settlement by the Canterbury Association in 1850. The reredos is carved from the kauri decking of the Hurunui River bridge, an area that is at the most northern reach of the Anglican Diocese of Christchurch.

The reredos was carved by Frederick Gurnsey (1868–1953) and Jake Vivian (1912-1998), Gurnsey’s assistant from 1926-1951. Gurnsey was a leading figure in his time executing hundreds of works in local wood and stone. The chancel reredos and the St George and St Michael Memorial Chapel at Christ Church Cathedral are considered among his best-known works.

The reredos was designed by local architect Richard Strachan De Renzy Harman (1896-1953) and the then Dean, later Bishop, Alwyn Warren (1900-1988), who developed the design and its detail.  Harman was appointed the Cathedral’s consultant architect in the 1940s and also designed the St George and St Michael Memorial Chapel.

Harman had at one point designed an extension to the chancel and left brief but necessary instructions on how to dismantle the reredos should this extension be undertaken. On the instructions was a hand written note stating they were to be left on the top of the reredos. This they were and many decades later were discovered by Cathedral Administrator Chris Oldham.

Iconographic and carved detail of the reredos is complex. Within the detail it contains the instruments of the Passion of Christ – the crown of thorns, the nails, the centurion’s lance and the sponge. On the left and right hand sides of the reredos are six figures or statuettes carved by Gurnsey. On the left are Samuel Marsden, Archdeacon Henry Williams and Tāmihana Te Rauparaha, and on the right are Bishop George Augustus Selwyn, Bishop Harper and Bishop Patteson.

Five of these figures have now been retrieved – three immediately post-quake in 2011. Curiously of the three figures that were unable to be retrieved in 2011, two, Bishops Harper and Selwyn, were recently recovered from the opposite end of the Cathedral in the west porch. The statuette of Samuel Marsden remains to be retrieved and is visible on the High Altar.

The subjects of these statuettes were chosen by the Cathedral Chapter as being men who had fostered the establishment of the Anglican church in New Zealand and the Pacific. Samuel Marsden (1765-1838), was a prominent member of the Church Missionary Society (CSM) and the driving force bringing Christianity to New Zealand in the early 19th century preaching the first known Christian sermon at Oihi Bay near Rangihoua, on Christmas Day 1814. Having learned the Māori language from Ruatara, a Ngāpuhi Rangatira, it is thought he may have preached the sermon in Te Reo. Archdeacon Henry Williams (1792-1867) was also a prominent leader of the Church Missionary Society in the first half of the 19th century.

Tāmihana Te Rauparaha (c1819-1876) was baptised a Christian in 1841 by CSM Missionary Octavius Hadfield. In 1843 he came to the South Island preaching Christianity and in 1844 he accompanied Bishop Selwyn (1809-1878) on his first overland trek to the South Island.

Selwyn was the first Anglican Bishop of New Zealand from 1841-1869 and preached and conversed in Te Reo. The Selwyn pulpit in the Cathedral has four alabaster panels which illustrate scenes from his life in New Zealand. Bishop Patteson (1827-1871)  was the first Bishop of Melanesia and his ordination by Selwyn is also depicted on one of the Selwyn Pulpit panels.

The statuette of Bishop Harper (1804-1893) depicts him with his primatial cross in his right hand and as builder of Christ Church Cathedral he holds in his left hand a model of it. As the first Bishop of our Cathedral there are a number of memorials to Harper including a panel in the Selwyn Pulpit and the recumbent effigy of him on a tomb chest in the north transept. Harper was the second Primate of New Zealand after Bishop Selwyn.

The reredos has suffered earthquake damage but will be restored, as will the statuettes, which will be returned to their positions on it as part of the reinstatement project.

Image 1: The reredos pre the 2011 earthquake

Image 2: A recent image of the reredos showing the earthquake damage with the figure of Samuel Marsden 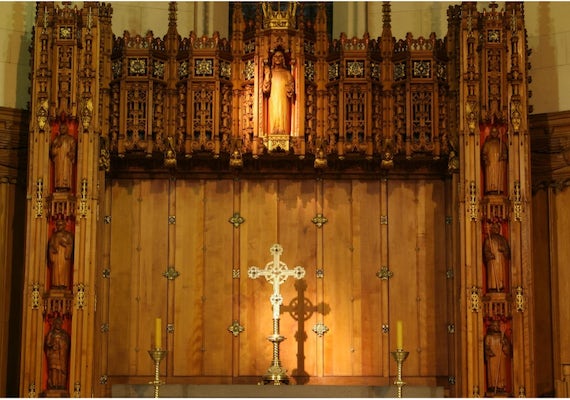 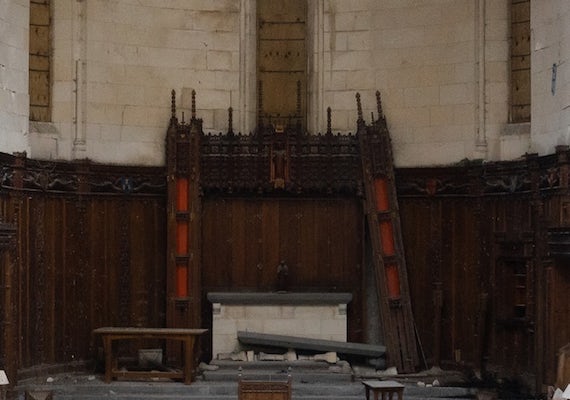