The beautifully decorative pulpit at the north-east end of Christ Church Cathedral commemorates Bishop George Augustus Selwyn (1809-1878). Selwyn was appointed Bishop of New Zealand in 1841 and was the first and only Bishop of New Zealand with his diocese also taking in the Islands of Melanesia. The Cathedral pulpit is thought to be the only such memorial of its kind to Selwyn in New Zealand.

Selwyn had learned Te Reo Māori and on arrival in New Zealand in 1842 was able to converse and preach in Te Reo. In 1844 Selwyn undertook his first overland trek in the South Island beginning with a service in South Canterbury at Te Wai-a-Te Ruatī. He was accompanied on the trek by Tāmihana  Te Rauparaha, son of the Ngāti Toa Leader Te Rauparaha, who had become a devout Christian having been baptised by CMS Missionary Octavius Hadfield in March 1841.

The Selwyn Pulpit was designed in 1883 by the Cathedral’s supervising architect Benjamin Woolfield Mountfort (1825–1898). It was completed in 1888 a decade after Selwyn’s death. It is made from Castle Hill Limestone, with columns of Hoon Hay stone polished to look like Purbeck marble as they were on the Baptismal font, also designed by Mountfort. The pulpit stands on a pinkish limestone base from Peter’ Quarry and has a marble inlay band around it with the words G. A. Selwyn, Bishop of New Zealand in Lombardic characters. Its interior is lined in rimu. The whole pulpit wraps around the north west crossing column and is accessed by an ornate iron staircase.

This richly ornate pulpit was first used in 1884 but it was not until 1888 that the beautifully carved panels in alabaster telling of the episcopate of Selwyn were installed. The panels depict: Selwyn preaching to Māori; Selwyn greeting Bishop Harper and his family on their arrival in 1856; The settling of the Church Constitution in 1857; The Consecration of Bishop Patteson as the Bishop of Melanesia in 1861.

Mountfort chose architect/sculptor John Roddis of Birmingham to undertake the work of the four panels which sit in quatrefoils on the pulpit. Roddis died before completion of the work but his detailed drawings and instructions enabled fellow British sculptor J L Clark to complete the work. Ornately and delicately carved in alabaster three of the four panels remain in situ however the fourth, depicting the Consecration of Bishop Patteson, was dislodged when the pulpit was damaged in the 2011 earthquakes. It has been retrieved and is in safe storage.

The damage to the pulpit is most critical on its southern side and directly associated with the fall of the stone cladding from the chancel arch. Once it is safe to enter the Cathedral work will begin to safely deconstruct the pulpit and retrieve the remaining panels to conserve them. 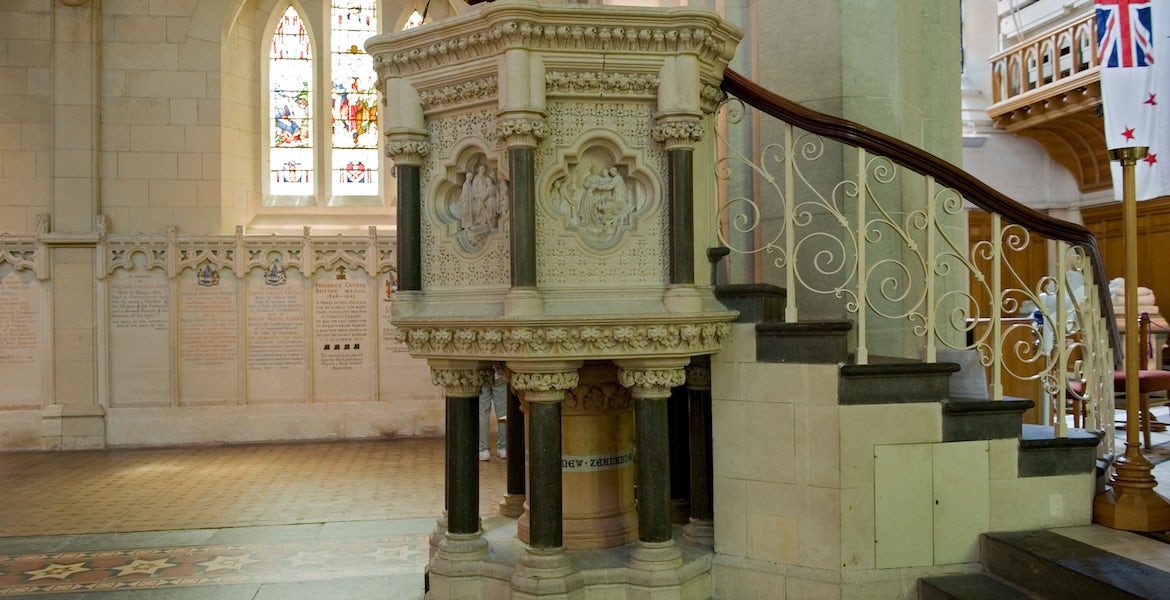